Archive for the tag “faith” 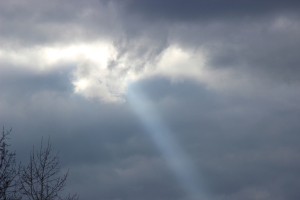 Her name is Barbara, but she prefers to be called Bee. I see her at the gym, always with a smile on her face and a glow in her round chestnut eyes. She wears beige orthopedic shoes, black weight-lifting gloves, and matching polyester outfits in bright solid colors. When she sees someone working out on a machine or with weights, she ambles over, raises a tiny fist and says, “Stay strong!”

Bee is a cheerleader for anyone who needs cheering, including me. Most people she greets smile back and say thank you. A very few look embarrassed or annoyed. Who is this old lady smiling and talking as if she knew them? Is she crazy or senile?

No, Bee is neither crazy nor senile. More likely, she’s an angel of some sort, put on this earth to bring joy to others. I talk to her whenever I can, just to feel her goodness streaming toward me. Maybe it will penetrate somehow, and raise my own positive energy. Maybe I can absorb some of her simple essence and become a kinder person.

I believe in miracles.

Bee has translucent rosy skin with nary a wrinkle, and white hair in flat waves circling her small round head. She may not have a halo, but she looks like an angel to me.

When I haven’t seen her for a while, I get panicky. Angels can’t die! I need my angels! I have my dream angels, my mom, my dad, my brother, my grandparents, but Bee is right in front of me, alive with love. My spirits lift and my heart warms when I see her. She is like a happy pill, a gratitude pill, a determination pill, an excitement pill, and she doesn’t even know it. If I told her, she would laugh.

If I don’t feel like working out, which is often these days, I will sometimes go to the gym just in case Bee is there. I need her like a dose of sugary optimism, especially during the holidays. My father died right after Christmas two years ago; my mother died in January almost fourteen years ago; and my first marriage crumbled during a last holiday hurrah . Succumbing to the tension of loss and longing, of expectation and disappointment, I sometimes feel I haven’t done enough, given enough, pleased enough, accomplished enough. My life can seem like a long series of failures.

Around her neck hangs a long chain with a fat gold ring, a ring she sometimes rubs gently as if summoning a genie. I finally got the nerve to ask her about it. It was her husband’s wedding ring, she told me, her husband who died a long time ago.

“Was he a good husband?”

She tilts her head and looks so directly into my eyes that I feel a beam of light entering me. “He was the very best husband in the world,” she says. “The very best man.” The love in those words makes everything around us seem to pulsate.

Perhaps if we looked more closely, spoke more warmly, opened our hearts more easily, we would see living angels all around us, angels who might wake us from our dull sleep and show us the love that is always present for the giving and taking. I’m lucky I have had Bee to remind me that it is how we leave others feeling that matters most. Maybe some day that knowledge will become my constant star even without her shining example.

Soon the days will get longer and spring will revive us with its sudden bounty of life and beauty. But for now, with the holidays upon us and the world in seeming chaos, I can only borrow Bee’s words and hope their blessing works for you. 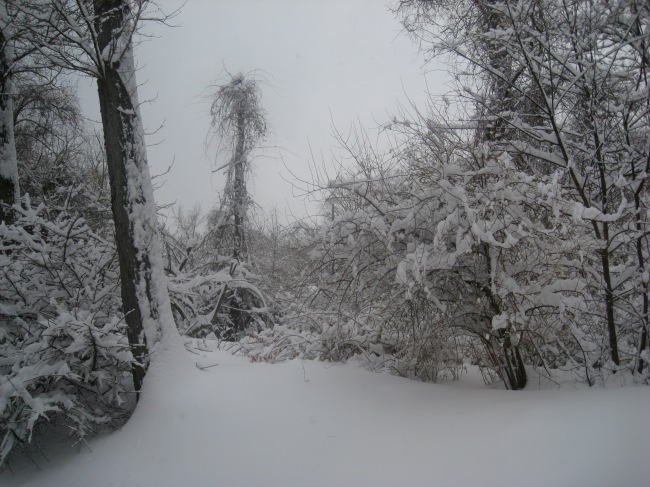 The first memory I have of snow is on Christmas Eve. I am sitting at the window of our Madison, New Jersey, flat, my face pressed against the cold glass as I watch the white flakes descend helter-skelter from the sky.  Outside, a faint street light illuminates their dance, some flakes flying back upwards, others suspended like tiny pillows in the breeze, still others rushing downwards like bombs on a mission. I cannot see where they land, only how they flutter or hesitate or careen in the golden glow. After what feels like an eternity in which time and space no longer exist, I hear my brother’s voice behind me.

“Santa Claus,” George says, only we are speaking in French since we have not yet learned English, so what he says is “Le Père Noël.” Father Christmas.

I stare intently, but all I see are white crystals falling from a dark sky, briefly lit by light, then disappearing to the ground. I want to see Santa Claus.

“I saw him,” he says, pressing his face next to mine. “He’s there. He has a shiny sled and it’s filled with presents. He passes by quickly so you have to stare really hard.”

We are in the living room by the tree, which is decorated with just a few shiny balls and big colored lights. My parents don’t have much money, but they are determined to give their children an American Christmas.

It’s getting late. From the kitchen, I hear our mother calling that it’s time to go to bed or Santa won’t come. He only comes when little children are asleep.

I believe everything my big brother tells me. Our sister is already asleep, and I know Mom will shoo us to bed if we don’t go soon. I squint. I pray. I feel tears filling my eyes. I do believe! So why can’t I see Santa? There must be something wrong with me.

“Keep looking,” George says. “Just stare and stare. I swear he’s out there.”

My brother goes to bed and leaves me by the cold window, staring and staring. I don’t budge. My small heart is brimming with love and faith. I cannot fail to see Santa Claus! If I don’t see him, I will ruin everyone’s Christmas. None of us will get presents! I know if I wait long enough and try hard enough, I will see him. I beg my mother to let me stay up just a little longer.

After a while, all the colors of the rainbow pass through my tear-stained lashes. I strain to keep my eyes open, my tiny hands clasped in prayer. And then, like the most miraculous gift I can imagine, he is there: Le Père Noël. His clothes, his sled, his reindeer are all golden as he flashes above the street lamp, then circles back and dashes across the sky again.  The figures twinkle like stars, tiny on the immense black-and-white canvas of this snowy night. I run to the bedroom and say, “I saw him! George! I saw him!” But George is sound asleep.

Today I am in Westchester, New York, just a few miles from where George lived before I had to take him to a memory-care home in France. Outside my motel this quiet morning, what were at first fat snowflakes are shrinking and flying faster, sticking to the ground as the temperature drops. I haven’t seen a snowfall in quite a while, and I am mesmerized, sitting alone by the window and remembering that long-ago night when I saw Santa Claus, and I believed.

George himself remembers nothing and no one. I imagine him sitting in a chair in the group room with his eyes closed, his head drooping to the side, his mind empty. I long to be by him, to hold his hand, even if he doesn’t know who I am.

And then I remember a snowy day the winter before last, just before Christmas. I had come to take care of him for a week, but when I went up to his apartment, he had disappeared. It was snowing. He had a serious infection in his hand, and no idea how he got it.  The doctors had told me I needed to come because he was forgetting to go in for his antibiotic infusions and they would have no choice but to hospitalize him for his own safety. His car had been impounded, and he was wandering around at all hours, often forgetting where he was going or why. I drove slowly up and down the streets of Mt. Kisco in the dark, looking for him. I went to every CVS and stopped at every little restaurant he liked. No George.

I was about to give up when I glimpsed what looked like a homeless old man trudging through the snow on Kisco Avenue, a black beanie pulled over his ears, big rubber boots on his feet, and white plastic bags clutched in each gloved hand. I stopped and rolled down the window.

“George? Is that you?” A pair of blank green eyes under snow-covered brows stared back at me. “It’s Maia, your sister.”

“Maia,” he said. “My sister! You didn’t tell me you were coming!” I saw a hint of the old George in his smile. Of course I had told him I was coming, over and over again. But I no longer felt a need to correct him, to try to force him to remember when he really could not.

I took him to Eduardo’s for his favorite Clams Casino and crème brulée. I let him drink wine, even though he wasn’t supposed to. He laughed and flirted with the waitress, happy at least for a little while.

Not even Clams Casino would rouse George today or bring him back to a semi-conscious state. Like a beautiful snowflake briefly illuminated in the cold, cold night, his life flutters downwards in a slow swirl of mistakes made and dreams unfulfilled, sometimes lifted by moments of joy or moments of awe, but destined sooner or later to fall, then melt and disappear. If I squint my eyes really hard through my tears, I feel the little boy he once was standing behind me and whispering in my ear: “If you really believe, you will see him.”  My heart soars with gratitude because I still believe that if I try as hard as I did that night so many years ago, if I have the pure faith and will of a child, the golden light of love and hope will surely flash by me again.  And perhaps I will see George above me in the night sky, sitting next to Father Christmas, waving good-bye.

Confessing My Heart Out
Adventures with my bettefr half. Coffee and travel.
mfourlbyhfourepoetry